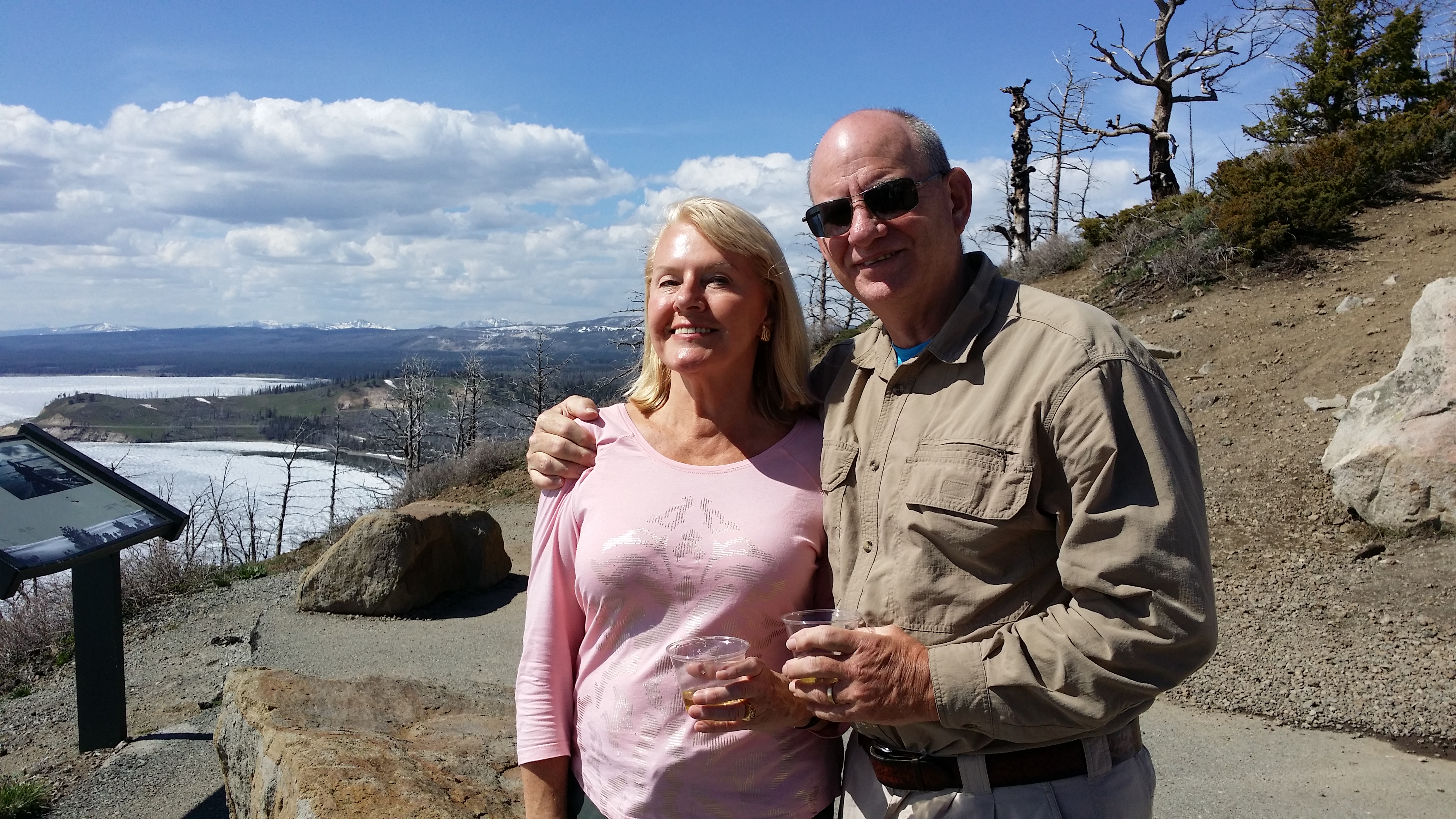 We drove into Yellowstone Park to celebrate my birthday. Harris, Carlene, Dennie  and  Nancy,  David and I.  We left Cody and drove towards the Wappedy school on the banks of the Shoshone river. Along the way those of us with eyes spotted a few big horn sheep. They described to me  Horses grazing in the foreground   on the new spring grass with many newborn foals nursing.   We were surrounded by  the snow covered peaks of Heart, Rattle Snake and Carter mountains. I couldn’t believe how much snow there were still on the peaks, whereas down on the flatland in Cody and the adjacent ranches the temperature rose into the eighties every day. Stores in town had planters with an array of blooming flowers and Lilac bushes and Mayday trees bloomed in gardens and along the road.    Though I was looking forward to our hike in the park, I was nervous.

Since  rumors of bear attacks abounded,  I certainly didn’t want my face taken off like what happened to a rancher last year. I hoped everyone    will be on alert. Dennie was the only one who carried bear spray. How would we know if bear spray is enough to prevent an attack.

We stopped for me to get out and to hear the long horn sheep graze on the prairie grasses. While we stood along side the road an ambulance came screaming by at an heart stopping speed. When I hear an ambulance speed by I always say a prayer for the medics and the person in need. On that golden morning I couldn’t help wondering if there was another attack. We stood in respectful silence as it sped by. I have often wondered how one gets medical help in those remote places and hoped this ambulance will be in time to save a life.

We drove on to the East gate of the park where we got out to use the facilities. A park ranger gave us information on the park and lo and behold he had a grisly bear skin which I touched. Bear pelt is  still the softest and thickest sensuous  pelt I’ve  ever touched.  Guess that is why one has fantasies of making love on such a skin.

We left the ranger and his pelt behind as we drove through the gate into the Yellowstone Park.

Our intension was to  hike a trail before the celebratory dinner at the Yellowstone lake Hotel. We arrived at the first trail only to find that it was closed due to bear danger, the second trail had the same warning posted and the third trail was pure mud from melting snow.

We gave up our hiking plans and continued on to the lake. The lake was still mostly frozen. They described to me the hues of whitenesses where the water was frozen and the blue hues where the water started defrosting.   We strolled on the shore. Before long we   found a downed tree trunk to sit down for a tasting of Dennie’s primo whisky. Dennie is a whisky aficionado and carries the whisky in an elegant container and serves it in tiny communion like glasses.  I sipped as if I did have communion for where is God’s grace more tangible than when one is  sitting with friends,  serenaded by meadow larks and perfumed by pine trees.

After a  lunch of fresh fish and salad topped off with  a creamy dessert at the lake hotel,   we took off again.   We stopped along the way to hike  up a ridge where we saw others with binocs. evidently they spotted moose and buffalo and far be it from us to miss a sighting of these creatures.

We found a rock out cropping overlooking  the lake.   Harris offered his gift- an elegant sparkling wine he brought along for the birthday toasting.  We toasted at this most unusual spot where the wind whispered through the fur trees and where here and there I could hear ice cracking in the bright afternoon sun.

Though I speak of ice and snow the day felt golden on my skin. Where ever we walked or sat the sunlight energized and excited me. It seemed to me as if I could see the blessed  blue of the sky with here and there clouds billowing   above me. I imagined the snowcapped mountains and the Indian Paint Brush and Blue Bells in the valleys. .

On the way back to our hosts’ spread  I dozed off and woke when the SUV crunched over the driveway gravel.

“What a day!” we all shouted when we sat down on the benches inside to take our shoes off.

There I left my shoes but not the joy and memory of a day made perfect by God.

I am trying out Facebook. It’s lovely to hear there are friends out there. I’m not sure how often I’m going to use this but for the start I’ll try.